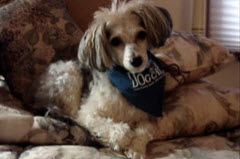 I can’t thank you enough for what you have taught PT and me over these last 4 years. It’s now hard to remember PT as the timid little Chinese Crested Powderpuff rescue he was when we first started with Basic Obedience. There was such an enormous improvement in his confidence through Basic Obedience that I immediately signed him up for Clicker Tricks. As you remember, our success in that class was tremendous. Now whenever I pull out the clicker, PT starts dancing about, eager to learn a new trick (see the video of him closing the door to the TV stand on command). And, of course, he absolutely blossomed in Agility classes with you. He not only excelled at learning to run the obstacle course, he also rapidly gained those essential socialization skills that have long been quite the challenge for him. We are also having fun doing drill with your Pooch Parade drill team.

I’ve had many comments from people who are impressed with how responsive to me PT has become thanks to your techniques. I am so grateful that Jack’s Bonnie and Alice told me about you! 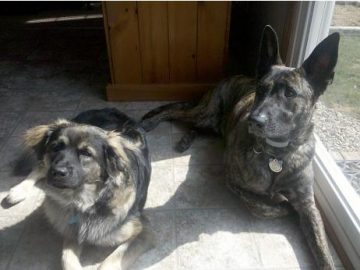 We just wanted to say thank-you for all the wonderful tools you have given us to improve the lives of our dogs! Both Nico & Enzo are better dogs today, because of lessons they were taught in your classes. We have enjoyed your classes over the years, and really learned a lot. One of the things we appreciate the most about your classes is that they are clearly structured, and every week the students are held accountable for what was taught the previous week.

Thank you so much!

We can’t believe it – it’s like we have a new dog!!! We haven’t used the spray since you left on Saturday, haven’t had any issues of jumping/biting and even managed to take him to a family event last night and he was perfect. We’ve only used the air thing 2 or 3 times and it still stops him in his tracks. he’s been doing well with the “wait” and moving.

The really funny thing is though – we also found that if you make that air noise with your mouth – kind of a whooshing noise – not as loud – that also stops him cold.

i am so amazed at his behavior. thank you thank you!!

He had a vet appt this week and did outstanding!! The groomers dog was sleeping on the entrance desk and he did bark at the dog for a few minutes but then came and laid down next to me and went to sleep. We had to wait 10-15 min. In the past, he would have barked the whole time. When he got back into the examine room and when the vet and tech came in he was very friendly. When the vet tech had to hold him for the vet to do the exam I was waiting for him to freak out but he didn’t!!! The vet examined his back hips and he didn’t growl or try to nip which is a so amazing since he never liked anyone to touch him back there, especially a stranger. The vet was very impressed with how well behaved he was. Last year for his exam, she thought they had to muzzle him (he was boarding there while we were on vac and had his exam then).

As far as the sweeper is going, we had a break through last week. I was actually able to keep him in a stay without anyone helping me (he did break once but I put him back) and was able to sweep for about 5 min. I was thrilled. The sweeper is just going to take a lot of time but he is doing much better.

I really feel the training has paid off. I feel much more at ease with Charlie around other people and he listens so well now. Thanks for all your help!!